We are committed to client service.  Some firms are focused on their business; we are focused on your business.  Each of our attorneys believes achieving the best outcome in every case is the top priority. From our initial analysis through closing our file, we are determined to exceed your expectations.  Ganan & Shapiro believes pursuing all available defenses is the best deterrent to frivolous and exaggerated claims.

The trial is not just an empty threat; instead, it is an option to be undertaken as soon as needed to push a case to closure. Of course, not every case requires litigation, and our attorneys work hard to settle cases with the least amount of liability for our clients. Your bottom line is ours. Whatever goal you are looking to achieve, we will do everything possible to get you there.

Founded in 1970 by Cliff Ganan and Jay Shapiro, Ganan & Shapiro has been advising clients in workers’ compensation matters for fifty years.

Since its founding, Ganan & Shapiro has steadily grown in size and expertise. What started out as two entrepreneurial attorneys, has grown to include nine partners and eight associates spread between two offices.

Our size has allowed us to provide greater coverage across Illinois, while still being nimble enough to adapt to our client’s needs.

OF COUNCEL
VIEW ALL ATTORNEYS

Clifford I. Ganan was the founding partner of Ganan & Shapiro, P.C.  Mr. Ganan established the firm in 1970, with his partner, Jay Shapiro.  He spent his career defending employers throughout Illinois, concentrating his practice on workers’ compensation defense.

Mr. Ganan served as a guest lecturer on both the local and national level, including the Illinois State Bar Association, the National Council of Self-Insurers and International Association of Industrial Accident Boards and Commissions. Mr. Ganan was a contributing author in the IAIABC’s journal, including such articles as Foreign Assets Control Regulations, 2003 and Vocational Rehabilitation and the Illegal Alien, 2004.

Mr. Ganan received his J.D., from DePaul University College of Law, 1965.  He earned his bachelors degree from the University of Illinois, Champaign in 1962.

With offices in Chicago and Peoria, Illinois, our attorneys are able to cover every venue in the State of Illinois.

Our Chicago office is located in the LaSalle Law Centre on the 17th Floor of 120 N. LaSalle Street. Our move to this building in January of 2018 places us in the heart of the Chicago Loop, across the street from City Hall and within walking distance to the James R. Thompson Center, home of the Illinois Workers’ Compensation Commission, and the Richard J. Daley Center, home of the Cook County Circuit Courts.

This central location allows us to handle cases in Chicago and the surrounding suburbs, as well as visit clients as necessary for claim reviews and present client seminars on a regular basis.

Our Peoria office was founded in 2001 and is located in the Associated Bank building.  As our practice has grown, our Peoria office has been essential in covering much of the downstate area. Despite this separate location, our attorneys share the same vision and goals, providing great service and advice to our clients. 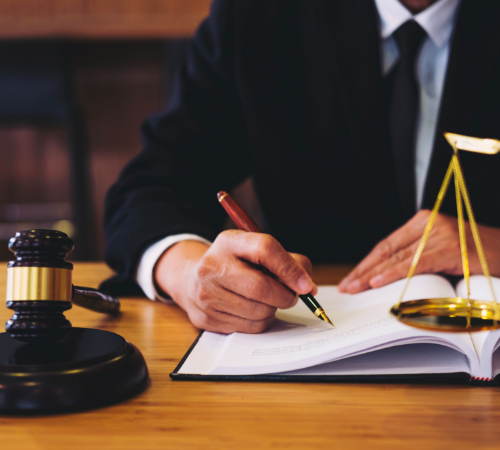