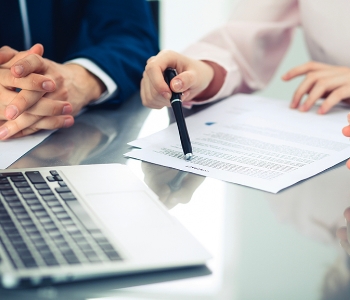 Claimant, Sylvia Mendez, filed an application for adjustment of claim pursuant to the Workers’ Compensation Act, seeking benefits for injuries she allegedly sustained on October 11, 2009, while in the employ of respondent, Monterey Mushrooms, Inc. Following a hearing held pursuant to section 19(b) of the Act, the arbitrator found claimant’s injuries compensable and awarded her temporary total disability (TTD) benefits under section 8(b) of the Act, reasonable and necessary medical expenses, and prospective medical care. The Commission affirmed and adopted the arbitrator’s decision and remanded the matter for further proceedings pursuant to Thomas v. Industrial Comm’n, 78 Ill. 2d 327, 399 N.E.2d 1322, 35 Ill. Dec. 794 (1980). On judicial review, the circuit court of Bureau County confirmed the Commission’s decision. 2021 IL App (3d) 190754WC-U, P2

“Taking into account your age as well as the effects of the injury and the condition of your lumbar spine as it exists today and the symptoms provoked by those injuries, it is my opinion that you are currently permanently and totally disabled from meaningful or gainful employment due to the work injury of 10/11/09. You will likely need ongoing medical care, specifically pain management, and as I said potentially surgical intervention in the future.” 2021 IL App (3d) 190754WC-U, P33

Claimant was thereafter examined at her attorney’s request by Dr. Robert Eilers on August 10, 2015. During his evidence deposition, Dr. Eilers testified that claimant could not return to her previous job with respondent due to her current condition and that claimant’s other employment options would be very limited, given that “she’s not fluent in English, et cetera.” According to Dr. Eilers, claimant was totally disabled from competitive employment as a mushroom picker and, “[a]t best, she might be able to do something sedentary on a part-time basis.” Dr. Eilers noted that claimant could “work an hour or so, and other days she won’t.” As a result, Dr. Eilers opined that claimant was not “going to be competitively employed.” 2021 IL App (3d) 190754WC-U, P46

Respondent’s attorney objected to this testimony on the basis Dr. Eilers is not a certified vocational counselor. 2021 IL App (3d) 190754WC-U, P47

The Court held that evidentiary rulings made during the course of a workers’ compensation proceeding will be upheld on review absent an abuse of discretion. Greaney v. Industrial Comm’n, 358 Ill. App. 3d 1002, 1010, 832 N.E.2d 331, 295 Ill. Dec. 180 (2005). Here, during the deposition of Dr. Eilers, respondent objected to Dr. Eilers’ testimony that claimant could not be “competitively employed” on the grounds that he was not qualified to offer a vocational opinion. When claimant sought to admit Dr. Eilers’ deposition testimony into evidence at the arbitration hearing, respondent renewed any objections made during the deposition. While the arbitrator indicated that she would rule on each objection, there is no indication in the record that the arbitrator expressly ruled on respondent’s objection. It appears the arbitrator impliedly overruled respondent’s objection by relying on Dr. Eilers’ opinion that claimant was permanently and totally disabled in the written decision that was issued following the hearing, which was affirmed and adopted by the Commission. 2021 IL App (3d) 190754WC-U, P66

On the question of whether the Commission erred by relying on the vocational opinions of a medical expert, the Court was unable to conclude that the Commission’s finding of permanent total disability was supported by other competent evidence so as to render the admission of Dr. Eilers’ testimony harmless. 2021 IL App (3d) 190754WC-U, P72

As such, the Court remanded the matter to the Commission for a determination of whether claimant’s disability is properly categorized as permanent total, without consideration of Dr. Eilers’ opinion testimony. The Court directed the Commission to evaluate the basis for Dr. DePhillips’ opinion and determine whether his opinion, along with any other evidence in the record, establishes claimant’s entitlement to PTD benefits under one of three theories of recovery: “medical” PTD, “odd lot” PTD or an unsuccessful job search by claimant. 2021 IL App (3d) 190754WC-U, P73

Defendant Bulley & Andrews, LLC (Bulley LLC) entered into a contract with building owner RAR2-222 South Riverside, LLC (South Riverside) to be the construction manager on a construction project at the building. As per the contract, Bulley LLC obtained a workers’ compensation insurance policy for its employees as well as the employees of Bulley & Andrews Concrete Restoration, LLC (Bulley Concrete), its wholly owned subsidiary, which contained a $250,000 deductible. Plaintiff Donovan Munoz, an employee of Bulley Concrete, injured his back while working on the project. Because of his injury, Bulley LLC provided plaintiff with workers’ compensation benefits, including paying over $76,000 worth of his medical bills. Later, plaintiff sued Bulley LLC for his injuries. On Bulley LLC’s motion, the circuit court dismissed plaintiff’s lawsuit, finding that Bulley LLC was immune from the lawsuit under the exclusive remedy provisions of the Workers’ Compensation Act. 2021 IL App (1st) 200254, P1

Plaintiff appealed the circuit court’s dismissal order and contended that, because Bulley LLC was not his employer, it was not immune from a lawsuit under the exclusive remedy provisions of the Act.

Plaintiff did not dispute that, on December 4, 2016, he was considered an employee under the Act and that he sustained his injury while engaged in the line of duty as such an employee. In other words, he does not dispute that he was under the purview of the Act. Rather, he argued that, because Bulley LLC was not his direct employer, it did not enjoy the immunity afforded by the exclusive remedy provisions. 2021 IL App (1st) 200254, P15

South Riverside executed an agreement with Bulley LLC to be the construction manager on a project at the building. As part of that agreement, Bulley LLC was required to obtain various insurance policies— including workers’ compensation insurance—to cover it, a subcontractor, or “anyone directly or indirectly employed by any of them.” To this end, Bulley LLC obtained workers’ compensation insurance that designated it and Bulley Concrete, among others, as named insureds. After plaintiff injured his back while working on the project, he filed a claim for workers’ compensation, which resulted in Bulley LLC paying over $76,000 worth of his medical bills, as they were obligated to do under the contract with South Riverside and the Arch insurance policy. These facts were proven though the contract between it and South Riverside, the Arch insurance policy, as well as the list of medical payments from it to plaintiff’s medical providers. “[T]he immunity afforded by the Act’s exclusive remedy provisions is predicated on the simple proposition that one who bears the burden of furnishing workers’ compensation benefits for an injured employee should not also have to answer to that employee for civil damages in court.” Ioerger, 232 Ill. 2d at 203. Despite the fact that Bulley LLC was not the direct employer of plaintiff, as it bore the burden of furnishing workers’ compensation benefits for plaintiff, it was entitled to avail itself to the exclusive remedy provisions of the Act. See id. at 204. 2021 IL App (1st) 200254, P22

Bulley LLC had a preexisting legal obligation to pay for workers’ compensation insurance and any benefits that may result by virtue of the contract it executed with South Riverside. Consequently, the circuit court correctly found that the exclusive remedy provisions of the Act barred the lawsuit by plaintiff against Bulley LLC and properly granted Bulley LLC’s motion to dismiss. 2021 IL App (1st) 200254, P23